The Dirichlet process (DP) is one of the most common – and one of the most simple – prior distributions used in Bayesian nonparametric models. In this post, we’ll review a couple different interpretations of DPs.

A DP, denoted $DP(\alpha, F_0)$ has two parameters: $F_0$ is a prior guess at the distribution in question, and $\alpha$ is a dispersion parameter that dictates how closely samples follow $F_0$.

To sample from a DP, it’s common to use a “stick-breaking” process. We present the generative process here, and explain the intuition below.

In practice, because we can’t draw infinite samples from $F_0$ in step 1, to demonstrate sampling from a DP, we truncate this to drawing $k$ samples.

Looking at the resulting draws, we can see that it starts to resemble $F_0$, but as a discrete distribution. Here we plot the draws and their CDF.

Drawing multiple samples we can start to get a sense for how much variability this prior (and our current hyperparameter settings) are allowing: 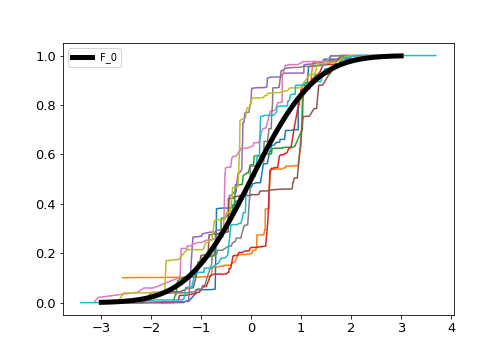 Finally, we can test how different values for $\alpha$ affect the variability of our DP draws:

Thompson sampling is a simple Bayesian approach to selecting actions in a multi-armed bandit setting.

Bayesian models provide a principled way to make inferences about underlying parameters. But under what conditions do those inferences converge to the truth?

Describing $\chi$ random variables as the lengths of vectors.

“Recommending that scientists use Bayes’ theorem is like giving the neighborhood kids the key to your F-16” and other critiques.