Monge and Kontorovich formulations of the Optimal Transport problem

Transportation theory studies the mathematical and algorithmic analysis of the physical movement of goods and resource allocation. The field of optimal transport is concerned with finding routes for these movements that minimize some type of cost.

We denote a discrete density over a support at $n$ different locations $x_1, \dots, x_n$ as

At a general level, the optimal transport (OT) problem is to transform one density into another density while minimizing the transportation cost. There are two major formulations of OT — one developed by Gaspard Monge and the other by Leonid Kontorovich. We explore both of these viewpoints below.

The Monge formulation of optimal transport restricts itself to transportation between two uniform discrete densities whose support has the same size $n$. In particular, it seeks a mapping from one density $\alpha$ to another $\beta$, where

Furthermore, we assume that there is a cost associated with assigning a mass at $x_i$ to be transported to $y_i$. In this case, we can represent this cost function as a matrix $\mathbf{C} \in \mathbb{R}_+^{n \times n}$. The $ij$’th element, $\mathbf{C}_{ij}$ will be a nonnegative scalar representing the cost of transporting from $x_i$ to $y_j$.

Taking the set of valid permutations to be $\text{Perm}(n)$, one way to write the optimization problem is:

The Kontorovich version of optimal transport is a strict generalization of the Monge version. Rather than assuming that each mass is transported to just one other location, the Kontorovich problem allows for it to be split among multiple locations. Furthermore, it no longer requires each density to be uniform over the same size support.

The goal is now to find a matrix $\mathbf{P} \in \mathbb{R}_+^{n \times m}$ whose $ij$’th element is a scalar representing the amount of mass at location $x_i$ that shuold be transported to location $y_j$.

Importantly, we have extra constraints on this matrix: We must ensure that mass is conserved in the transportation plan. In other words, the total amount of mass distributed from $x_i$ to all target locations must equal $a_i$, and the amount of mass distributed to $y_j$ from all source locations must be equal to $b_j$. Stating this mathematically, we can write the set of admissible transport plans as

This case is described most easily in terms of marginal and joint distributions. We observe two marginal distributions $p(x)$ and $p(y)$, and we’re interested in finding a transport plan that maps $p(x)$ to $p(y)$. In the continuous case, this plan can be described with a joint density over both $x$ and $y$. The set of admissible joint densities is given by:

Notice that this constraint is simply a generalization of the mass preservation constraint in the discrete case. Here, mass conservation is framed in terms of a joint distribution having particular marginal densities.

Again, the goal of an optimal transport problem in this case is to transfer the blue masses to the orange masses in the most “efficient” way possible. Here, we can solve this with a simple linear program. Suppose our cost function is the squared Euclidean distance, $c(x, y) = |x - y|^2$. In other words, the cost of transporting a mass from location $x$ to $y$ is the squared distance between them.

We have a linear objective and linear constraints, so we can solve this with out-of-the-box linear programming tools. Using SciPy’s tools, we can solve it with the code below. Because SciPy only supports matrix-vector equations of the form $\mathbf{A}\mathbf{x}=\mathbf{b}$, we flatten all matrix-matrix constraints to satisfy this form, then reshape at the end.

We can now check what the transport plan looks like. Below is a heatmap of the plan.

We can see that all of the mass of $p(x)$ at $x=5$ will be transferred to the rightmost location of the support of $y$ (which is closest in the Euclidean sense), and the mass of $p(x)$ of the left will spread itself out among the remaining masses of $p(y)$.

Consider another higher-dimensional, yet still simple, problem. Here, we have $10$ masses in each distribution, as shown in the stem plot below.

Each of the distributions is uniform, and we expect the optimal transport plan to be the one that simply shifts the nearby masses in $p(x)$ to the closes ones in $p(y)$. We can plot the transport map over time as the algorithm progresses (an interior point method provided by SciPy in this case). The animation below shows this.

Transport plan over iterations of the LP solver.

We can see that the solver quickly reaches the optimum, which in this case transports mass only along the diagonal of the heatmap.

As shown above, OT also applies to the setting with continuous densities. As a simple example, consider two densities,

These marginals are plotted below, and we’d like to find the joint $p(x, y)$ that minimizes a cost.

Note that there are infinitely many joint distributions that are consistent with having observed these marginals. Below we’ve plotted the contours three such two-dimensional densities. 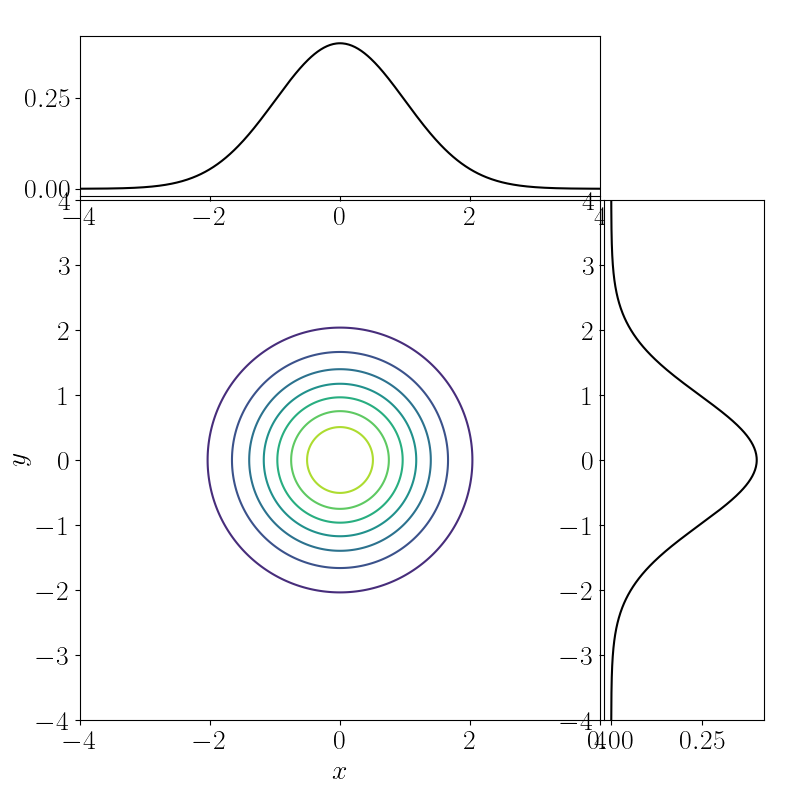 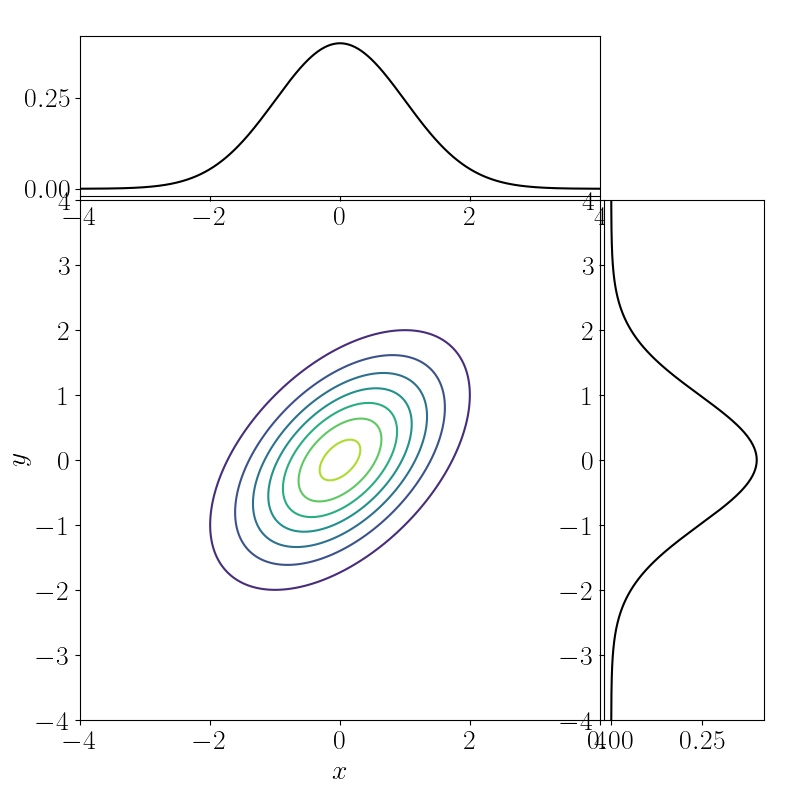 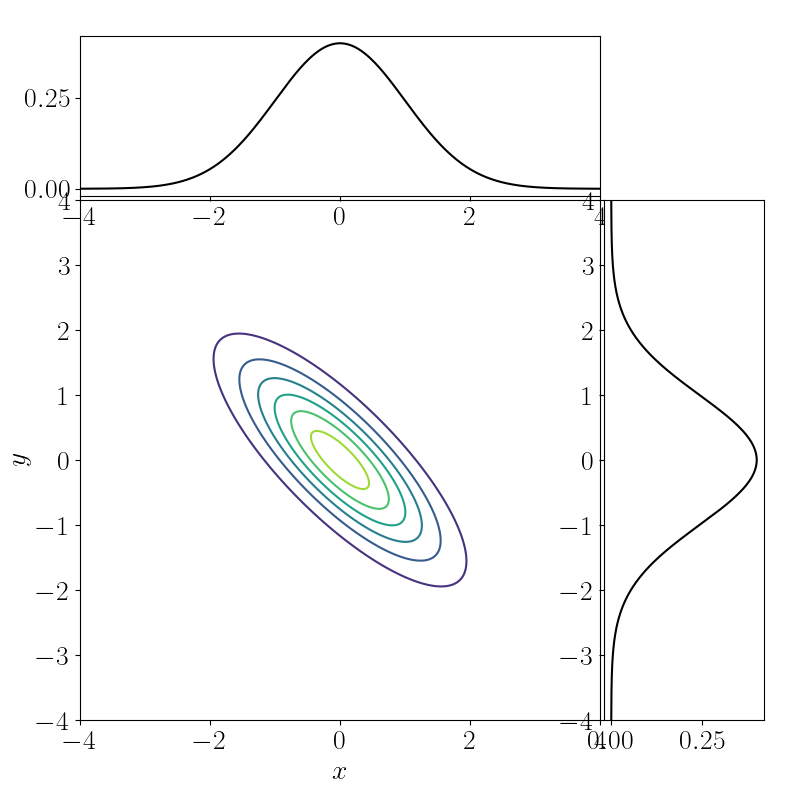 Let the cost be the squared Euclidean distance:

Then our optimization problem is

In this case, it becomes obvious that the optimal transport plan is to “do nothing.” In other words, to transport $p(x)$ to $p(y)$, we don’t have to do anything. More concretely, the optimal joint density will be a multivariate normal distribution with covariance

with $u, v \rightarrow 1$. This is effectively a one-dimensional Gaussian, as plotted below.