The “Gumbel max trick” is a method for sampling from discrete distributions using only a deterministic function of the distributions’ parameters.

This idea turns out to be useful for a variety of purposes. One of the most popular and recent applications of reparameterization has been in performing variational Bayesian inference using stochastic optimization. Intuitively, reparametrizations such as $x = \mu + z \sigma$ allow us to directly take derivatives of a loss function with respect to model parameters, and so stochastic optimization can be performed.

An important question is: what kinds of distributions can or cannot be reparameterized in this way? The Gaussian case above seems especially nice, but perhaps not generalizable. It turns out that there are certain families of distributions that are amenable to this (e.g., the location-scale family), but many distributions do not admit an easy reparameterization that we know of.

Discrete distributions present a particularly tricky case, and this is the focus of the trick below.

How can we sample from an arbitrary discrete distribution using only randomness from a fixed distribution, and a deterministic function of the distribution’s parameters? The “Gumbel max trick” gives the following solution.

In other words, drawing samples using the above recipe will give us samples from the desired distribution.

Let’s take a closer look at the reparameterization. For each unnormalized state probability $p_i$, we took its logarithm, then added some noise from a Gumbel distribution. Finally, we take the state $i$ that had the maximum value $\log(p_i) + G_i$.

The Gumbel distribution is often used in extreme value theory (i.e., modeling maxima and minima of phenomena). It looks similar to a Gaussian, but has a longer right tail. Intuitively, this means that adding Gumbel noise will randomly bump up lower-probability states some of the time. A more rigorous proof of why this trick works can be found here. Also, note that the Gumbel itself can be reparameterized as $-\log(-\log U)$, where $U \sim \text{Uniform}(0, 1)$.

We can show how this works with a simple simulation. Consider a discrete (Bernoulli) distribution with two states, with unnormalized state-specific probabilities $p_1 = 1$ and $p_2 = 9$. The following code generates samples from this distribution: 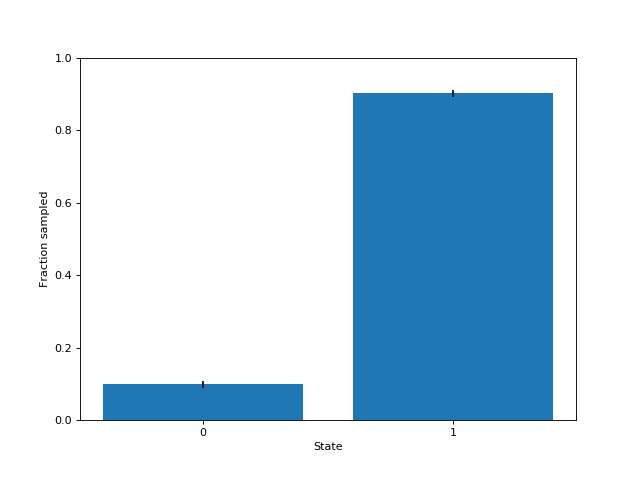