BFGS is a second-order optimization method – a close relative of Newton’s method – that approximates the Hessian of the objective function.

Throughout this post, we let $f(x)$ be the objective function which we seek to minimize.

Newton’s method is one of the most fundamental second-order methods in optimization. The key idea is to form a second-order approximation of $f(x)$ at the current point, find the minimum of this approximation, and repeat.

Specifically, suppose we’d like to minimize $f(x)$ starting at $x_0$. Let $x \in \mathbb{R}$ be one-dimensional for simplicity for now. If we take a linear Taylor expansion of $f^\prime(x)$, we have

This update is known as Newton’s method.

Note that the size of the Hessian is $p \times p$ in this case. For high-dimensional optimization problems, storing these matrices may become difficult. Furthermore, finding the inverse Hessian could be difficult or computationally expensive. Approximating the Hessian (or its inverse) can yield great computational boosts without much loss in accuracy. One method that uses such a trick is BFGS.

Consider again the scenario in which we are minimizing $f(x)$ where $x \in \mathbb{R}^p$. We are iteratively updating $x_k, k = 1, \dots, T$ where $T$ is determined by some convergence criterion.

Suppose we use a quadratic approximation to $f$ at each iteration. Denote this approximation at step $k$ as $\hat{f}_k(x)$. Specifically,

Now, instead of directly computing the Hessian $[\nabla f(x_k)]^2$, let’s approximate it. Call this approximation $B_k$. Various choices for $B_k$ form a famliy of methods called “quasi-Newton methods”. Here, we review one of the most popular approximations, which leads to the Broyden–Fletcher–Goldfarb–Shanno (BFGS) algorithm.

The BFGS update rule is the same as Newton’s method, simply replacing the Hessian with its approximation:

Suppose we are currently on step $k$, and we have just generated the next iterate $x_k$. Our goal is now to find a good $B_{k+1}$.

Plugging in $x_{k+1}$, we can immediately see that the second condition is met:

For the first condition we have

To make $B_{k+1}$ positive definite, we must have that

The solution is then given by

This is the BFGS update rule. There are a couple important properties to notice about it:

To further build intuition, notice that when $p=1$, this update reduces to

This is simply a linear approximation to the (reciprocal) second derivative.

Suppose $f(x) = x^4$ is our objective function. Further, suppose $x_k = 4$ and $x_{k+1} = 2$. Then we can visualize the BFGS method by seeing that the approximation to the second derivative will just be the slope of a linear interpolation between the values of $f^\prime(x)$ at these two points. In this case, the computation is extremely simple:

Here’s a plot of how this looks: 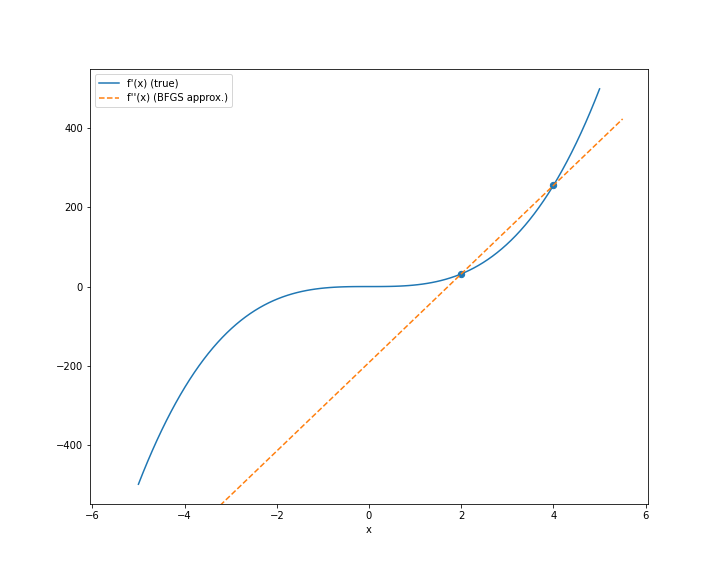 Notice that if $x_{k+1}$ and $x_k$ are extremely close to each other, the approximation will improve. In fact, in the limit, this reduces to the definition of a derivative: